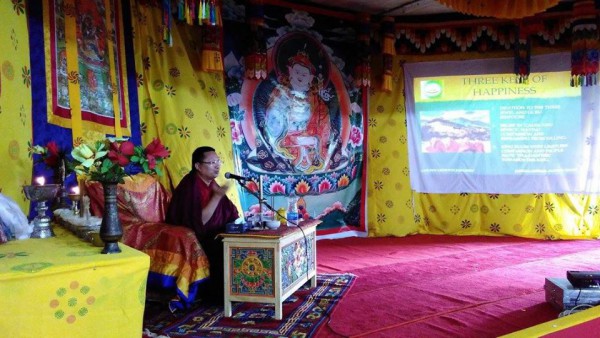 “When Bhutanese speak of modernity and progress, do we remember to give due credit to the difficult and dangerous groundwork done by all the poor road-workers, who live in impoverished conditions and die building our roads? Similarly, when we speak of ‘Druk Choeden Gyalkhap’ – the Dharma Kingdom of Bhutan in times of such monumental changes, who will do the groundwork if not us – to sow auspicious seeds in accord with the principles of a Dharma kingdom? Therefore, Zhiwai Lamten was conducted by Jangsa to fulfill this urgent necessity of these critical times!” – Lama Kunzang Dorje Rinpoche.

What would the collective karma, and common destiny of our Dharma Kingdom be without such spiritual refuge, protection and blessings from all our spiritual masters?

Photos of Lama Kunzang Dorje Rinpoche, founder of Jangsa, and driving force behind ‘Zhiwai Lamten’ during the conduct of the nationwide holistic education program.