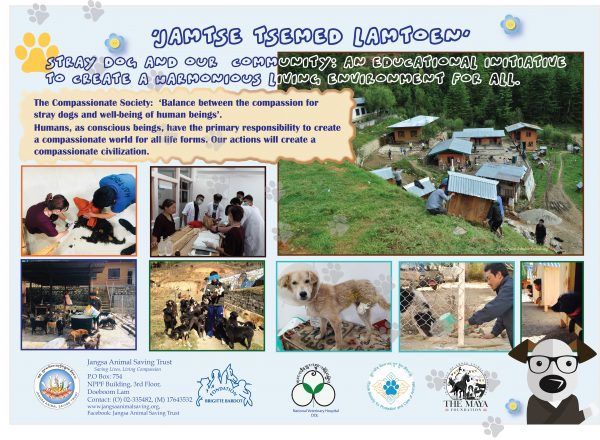 The program will be continued in other primary schools and on the streets of Thimphu in days ahead.

Tshering Dorji (a board member) kicked off the program with the rendition of the popular song – Kuzuzangpo, at Etho Metho Primary School. This was followed by a few theatrical skits that were specially developed by Jangsa over weeks for the program.

After the rousing start and enthralled reception, Jangsa distributed brochures of educational content as well as handed out token postcards to students who got the answers right in the questionnaires. Then, in the presence of stakeholders such as RSPCA, Dr. Nima from NVH gave a short but insightful talk on the issue.

After the program ended, the school authority offered the present with refreshing tea. Jangsa remain grateful to madam principal for the warm reception and hospitality.

The main objective of Jamtse Tsemed Lamtoen is to impart vital knowledge to the audiences that would inform them how to save themselves from and prevent a dog bite, and other related issues, but also more importantly – to teach kids to be compassionate towards stray dogs, and strive to restore the harmonious co-existing dynamics between human beings and their best friends – the dogs.

As reported, JDWNRH in Thimphu is witnessing increased numbers of dog bite cases. Since students, especially the younger ones are more vulnerable, Jangsa has specially tailored Jamtse Tshemed Lamtoen for the younger kids.

The program emphasizes on other pertinent topics like dog sterilization, dog adoption, vegetarianism, waste management and merit of co-existence.

This program is brought to you by Jangsa Animal Saving Trust (JAST) with support from Foundation Brigitte Bardot (FBB). This also comes as collaborative efforts of JAST with NVH, department of livestock, RSPCA and Maya foundation.